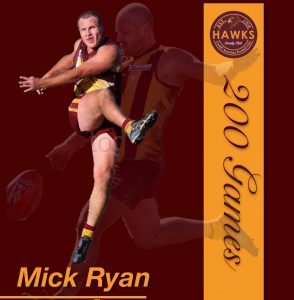 This Saturday club great Mick Ryan will run out for his 200th senior match for Cardiff AFC. What perfect timing to bring up the milestone than in front of the Hawks Old Boys as the club celebrates the annual Old Boys Day and the 1998 Premiership Anniversary.

Ryno first joined the Hawks back in 2004 when he was posted to the Singleton Army Barracks as he was then a Commando in the Australian Army Corps. Ryno recalls running into Hawks player, Mick Krake on the Barracks in the first week of posting and Krake thankfully urged him to join the Hawks for the upcoming 2004 season. Ryno quickly made an enormous impact on the playing group as the Hawks went on to become the 2004, 2005 & 2006 Premiers.

Seasons. Whilst Cardiff claimed the Minor Premiership in both those seasons, unfortunately, they couldn’t go on to secure the ultimate, falling short in both Grand Finals. It must be said though, one thing that Ryno’s coaching will be remembered for is seeing the freakish talent of a then 15-year-old Isaac Heeney. Ryno backed the young star and played him in the 2011 Grand Final in which Isaac didn’t let him down.

In 2016 at the age, 39 years and 700 plus goals in the BDAFL Ryno decided to hang up the boots for top grade footy. Whilst he no longer runs out at 2 pm he continues to lead the Hawks Reserve Grade side around the park. Ryno says “to this day he just loves the contest on a Saturday and is really enjoying playing alongside his younger brother and having his parents at the club after being states apart for most of his footballing life”

When questioned what his greatest moments have been at CAFC Ryno says “Obviously the 04, 05, 06 Premierships stand clear of the pack but kicking my 100th goal in the crazy conditions of the 06 Grand Final and ten years of continuous rep footy is something I’m individually proud of. I’m also proud of being involved heavily with supporting the club in its endeavours of getting the Hawkettes Social Female Footy off the ground way back in 2011 and 2012 before there was any mention of competition female footy.

Cardiff Australian Football Club would like to congratulate Mick Ryan on reaching the 200 game milestone this Saturday and also thank him for all he has given to the game in the region and our club itself.