Black Diamond Cup Mens
It seemed the shackles were off and the final score line showed that against fierce rivals Warners Bay on Saturday.
With a major upset between Killarney Vale and Wyong a long shot to go our way in order to still be a finals chance, our boys played with the freedom and fun that comes with not being afraid to make mistakes.
Perhaps it was also off the back of two debutants – newcomer Reece McLean and first year player Matthew Holmes – that refreshed the group and gave us the enthusiasm to run the game out strongly after an even first quarter in which we kicked three goals to two.
From there the floodgates opened and what was also pleasing is that we held the Bulldogs to only two goals for the rest of the day.
Izaac Hughes had a day out up forward slotting eight majors. His set shots were much improved, allowing for the tricky cross breeze, and he beat a number of opponents over the course of the game who just couldn’t go with him in the air.
Youngster Max Kozlik had his best game for the season after stepping into First Grade regularly this year. His energy and physicality were a feature of his game, body-lining the ball on a number of occasions against much bigger opponents.
Up by 33 points at half time, the message to the group was to continue to be ruthless and close the game out strongly. And that they did, extending our lead to 48 at the final change mostly through the grunt, hard running and composed ball use by the ever-reliable Patty Delaney. Pleasingly we finished the game off like professionals in the last quarter with the final margin 78 points.
Much credit needs to be given to the defensive group who rebounded time after time and showed they can be as desperate or composed as needed in any situation. Matt Vukovich took some strong saving marks and debutants McLean and Holmes handled the pressure and responsibility that a defensive post demands with immense poise.
Can winners were Delaney, Holmes and Kozlik who also won the GOAT Beanie Players’ Player Award.
Attention now turns to Singleton for our final home game of the season this Saturday. After atoning at the weekend for our draw with Warners Bay last time we met, this will be another chance to avenge the four-point loss to the Roosters earlier this season – both of which conspired to ruin our finals chances.
Black Diamond Cup Womens

Coming off two losses against the only two teams above us on the ladder the birds knew this week we needed to rebuild the momentum, confidence and belief leading into finals.

Last time the birds met Warners Bay we came back in a thrilling finish to win by 1 point. This time we were at the nest and wanted to show we have improved since last time we played them.

The first quarter was spent mostly down our end with us proving just how good our forward pressure can be. After a tough battle around the ball we were able to convert this into 2 goals from Clare and Jodi.

The second quarter was much similar to the first. We started to settle into the game but we were still feeling like Warners Bay weren’t allowing us the space we needed.
Our half backs kept repelling Warners Bay attempts to get it down the end. Their runs down the wings with even some run and bounce from Matisse Coram-Parker in front of our fans was awesome to see.
Abbey scored our only goal for the quarter with a good snap and Warners Bay were kept to just one goal.

The third quarter was when we came out firing. We were winning the ruck contest and creating play through our mids. Our forwards created space were leading allowing us to hit our targets. Our small forwards we dangerous as ever running, sweeping and snapping goals. Goals from Tayla Grazules and Abbey Cooksley proved this. Our backs continued to push hard and showed confidence by using their speed running off their player.

The fourth quarter saw us extend our lead further through much of the same play. Goals from Clare and Tayla Gregory topped off our win.
Overall this game we wanted to focus on our handballs using the sweeper option, leads and hitting targets in space and contest marking. We were able to show this throughout the four quarters.

Thank you to Bilks and Vuko for stepping in and helping with coaching our first half. The birds really appreciated your kind wise words.

This team has pulled together in what we can say was a tough week. We are an awesome on the field but even better off the field. Individuals don’t win premierships its all about the team and this team proving this in our build towards something special in a few weeks time. Get on board Hawks family. We need your support to get us there.

Black Diamond Shield
Who doesn’t love a top of the table clash with our old rivals Warner’s Bay. Once again, down on personnel to cover for injuries and unavailability our Reserve Grade lads knew this would be quite the challenge, but a challenge that had to be embraced in the lead up to finals.
The first quarter began with the boys dominating the clearances, but unable to capitalize on the scoreboard. A Warner’s Bay goal gave them the opening of the match, but thankfully our experienced centre half forward Nick Kocon was on the end of some good delivery bagging 2 to give the boys the lead at the quarter time break.
Sitting second on the ladder and being the classy outfit they are the Bulldogs responded in kind kicking the next 3 goals in a row before a clever snap from Dave Graan arrested the momentum but still left Cardiff trailing at the main break by 5 points.
Warner’s Bay again got the jump on us which saw them take a commanding 40 – 24 point lead. The Bulldogs were clinical in their contested possession. However, our Reserve Graders responded capitalizing on a missed opportunity from that Dogs which resulted in a great mark and goal from full forward Andrew Walker. Cardiff went into the final quarter trailing by 10 points. What followed was a premiership-like response of character and determination.
Our Hawkies knew they had to respond and get the day off to a flier for the rest of the club. With Nash dominating the ruck with clinical tap work, the boys knew they were in prime position. A brilliant individual effort from Nick Kocon, resulted in his third of the match. He then topped this one upping himself, when he stepped two opponents and bagged his fourth goal of the game in a BOG performance to give the Hawks a 2 point lead. Another centre clearance win saw Walker kick his second goal of the game.
However, the momentum changed yet again when Warner’s Bay surged forward and kicked another. Thankfully, the Hawkies welcomed back our pocket rocket Dave Graan who was given the entire forward 50 to work in. He didn’t disappoint, bagging his second of the match giving us a 10 point lead back.
If the match wasn’t already sewn up, barometer James Rinkin wasn’t done yet. A massive 50 meter sprint and quick snap put the match beyond doubt in an awesome solo effort. This was great to see from Rinks as he reaped the rewards from his hard work all season.
A fantastic result for the boys in a strong display of character and resolve to secure the Minot Premiership. The boys now turn their eyes to finals.
Up the Hawks!
Goal Kickers: N. Kocon 4, D. Graan 2, A. Walker 2, J. Rinkin
Best Players: N. Kocon, D. Graan, J. Foot, J. Rinkin, J. Nash, I. Cocking
Social Competition

Junior Team of The Week - Under 9s

All 14 players travelled to a wet and cold Maitland to verse a quality outfit. Maitland had 10 players so 2 players each quarter had to go and play for them.

Maitland started very strong and kicked a few goals. Cardiff struggled to get the ball forward and needed to start working as a team and ensure they matched up to their opponents.

At quarter time the aim was to ensure that we ran harder and ensured that we continued to look for our players once we received the ball. Mason worked hard in the middle and ensured that he got his hands to the football first throughout the day. He was one of our stand outs today. In the second quarter Caleb kicked a number of goals for Maitland and hurt us as they went forward again. Once again Caleb was solid throughout majority of the game.

Dara and Brody were aggressive at the ball like always. Dara had a few spectacular marks throughout the game. In the fourth quarter Cardiff continued to pressure and continued to score. Layken had his best quarter (in the fourth) and game for the year. He was extremely strong in defence and read the ball really well delivering it to his team mates accurately.

Once again it was a great performance from a team that continue to improve individually and as a team every week. Their commitment to training and game day has made it a pleasure to coach this bunch of young kids. 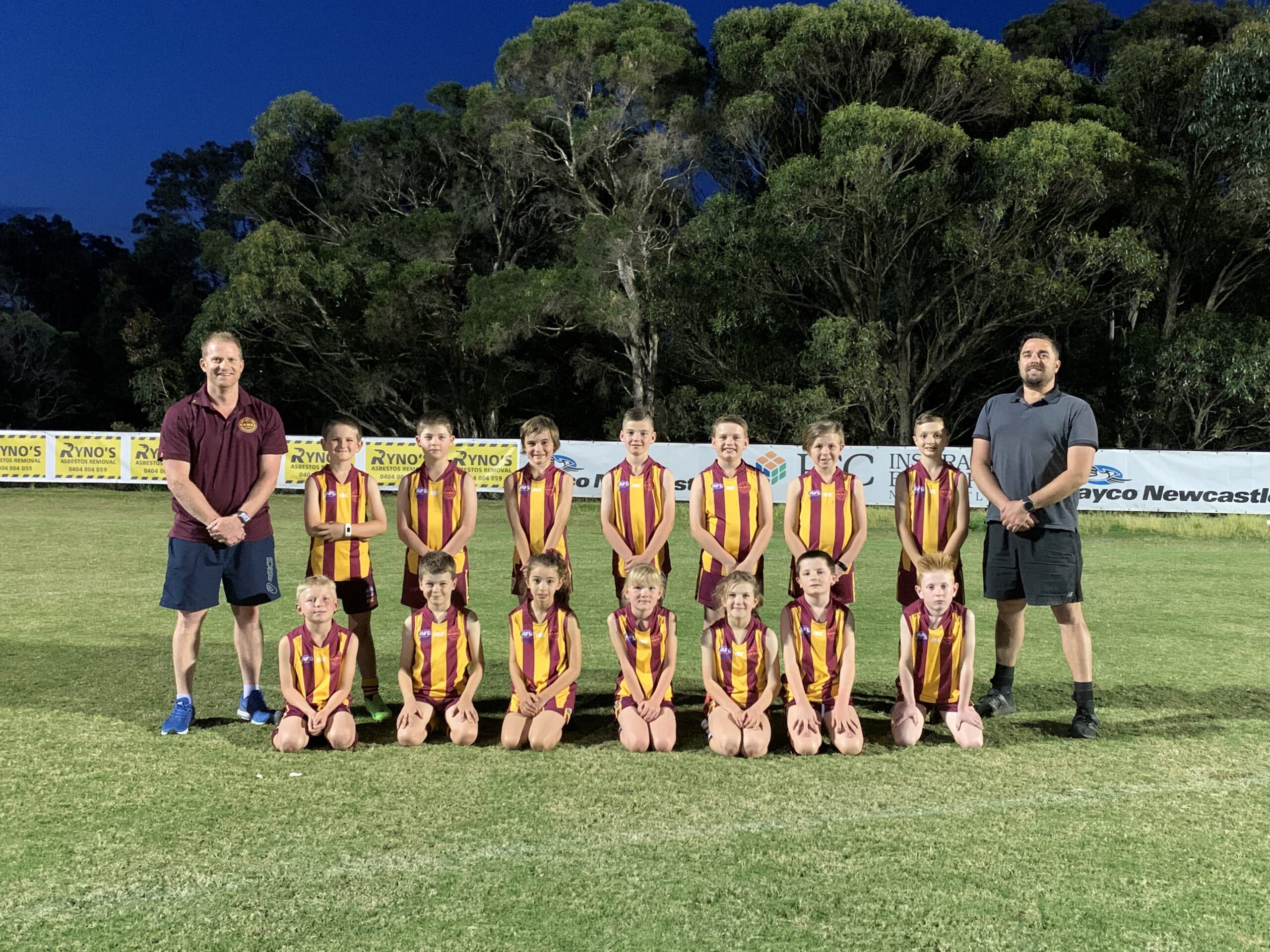 Junior Team of The Week - Under 13 Girls

Our under 13 youth girls team came into round 10 knowing that this weeks game was our last hit out before the finals, with a bye next week.

Missing some experience and the youthful exuberance of our under 11 youth girls players, this was a good opportunity to test ourselves.

Nelson Bay loaned us two players to even out the numbers. The first quarter started as a bit of an arm wrestle in conditions getting wetter and wetter. Our girls began to adjust to the conditions and started hitting the scoreboard.

The rain continued in the second and third quarters, but through some good teamwork so did our scoring opportunities.

The girls got themselves into a strong enough position that at three quarter time we gave Nelson Bay the chance to finish the game as a full team whilst also mixing up our team.

Another strong team performance with our experienced girls leading the way and the new girls showing impressive improvement in a condensed season.